Images Missing from Blogger Blog Posts when deleted from Google+ Albums How to fix – realgeeks.com.ng – Reloaded

One of the many features that Google introduced in its newly launched social platform: Google+, is that it displays all your Picasa web albums in the photo section of your Google+ account. You can view photos from your circles, your phone, your own photos and of course, it allows you to view, edit or delete your Picasa web albums directly from the Google+ interface.
What’s the link between Google Plus Albums and Blogger Posts?

Many Blogger blog users are not aware that the photos they use on their blog posts are saved in their Picasa web album. So when they join Google+ for the first time and see all their photos from their blog, they assume that the photos are also viewable by their friends and family members or even anyone who isn’t in their circles.
This is when the problem starts. Some Google+ users start deleting their albums and can unknowingly end up deleting the albums containing photos they have used on their blog posts for years.
This can easily be avoided. Users must know two things to be on the safe side:
1) Albums that you have not shared will be visible only to you:
As a Google+ users, you shouldn’t be worried about your blog images showing up in the photo section of their Google+ account as only the images that you share will be visible to your circles. 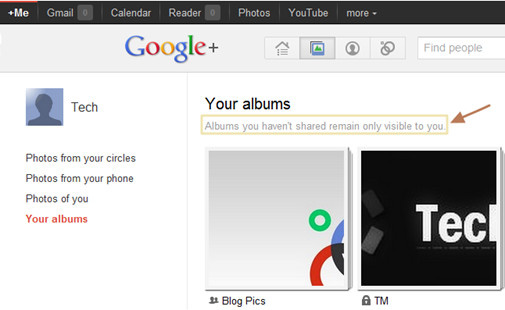 Related: Backup your Picasa Web Photos and data from other Google Product

realgeeks.com.ng is a full entertaiment website where you can get your latest musics and lyrics and obtain valuable information on the go.
Free Mobile Downloads: Apps, Games, Gospel Musics, Audio, Videos, comedy skits, Music Lyrics + News: Tech, Browsing CheatsPlease Recommend us to your friends