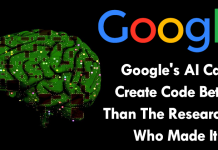 How can Google AI Create Code Better Than The Researchers Who Made It?

We all know very well that today how machines are able to teach machines. Recently, a system broke a record to categorize images by their content (marking a positive score to 82%). In basic words, the tech giant Google’s AI can now create code better than the researchers who made it.

In May 2017, the tech giant Google unveiled its project AutoML: an artificial intelligence (AI) designed to create other AI even more powerful. Now the tech giant Google has announced that AutoML has once again pushed Machine Learning’s (Machine Learning) capabilities to the limit: researchers have developed a learning software that is able to create its own learning software, which would be even more powerful than the best systems designed by the researchers.

Today, machines are able to teach machines. Recently, a system AutoML broke a record to categorize images by their content (marking a positive score to 82%). Although a relatively straightforward task, AutoML has also defeated a Man-made system to a more complex task as an integral part of autonomous robots and augmented reality: marking the location of multiple objects in a single image. For this task, AutoML scored 43%, compared to 39% for humans. These results are significant, as even at Google, few people have the expertise to design new-generation AI systems.

A rare set of skills is needed to automate this area, but once this is the case, the entire industry will change. “Today, these machines are handcrafted by machine learning scientists and literally only a few thousand scientists around the world have the skills to do so,” said the tech giant Google’s CEO Sundar Pichai. “We want to enable hundreds of thousands of developers to be able to do that,” he added.

AutoML designs a base model and analyzes the results and performance of the model. This allows it to make corrections on this basic model and improve it. This operation is repeated several thousand times and each new prototype is more efficient than the previous one. As a result, new prototypes are becoming more intelligent and almost self-contained. Such technological prowess marks the real beginning of a new mode of operation, which will help advance research in the field of artificial intelligence.

Much of this work involves imitating human neural networks and trying to feed them with more and more data. This is a machine-friendly job once they have been trained to do it.

The most difficult part is that of imitating the structure of the human brain at first (and at appropriate scales) to solve more complex problems. It is even easier to adjust an existing system to meet new needs than to design a whole new network of neurons out of thin air.

However, this research seems to suggest that this may well change in the future: as it becomes easier for existing RNs to design new and more complex systems, it will be important for humans to play a role in the future as “Guardian”.

Indeed, AI systems can easily create accidentally biased connections, such as associating ethnic and gender identities, with negative stereotypes. If engineers spend less time creating these systems, they will have more time for monitoring and refining them.

Although this is still a research project, Google wants to perfect AutoML until it works well enough for programmers to use it for practical applications. If they succeed, AutoML will be very likely to have a great impact well beyond the walls of Google. In addition, Pichai said the company wanted to “democratize this,” explaining that Google wanted to make AutoML available outside their walls.

So, what do you think about this? Simply share your views and thoughts in the comment section below.